Fellowship of the Food – Destination: Azafrán 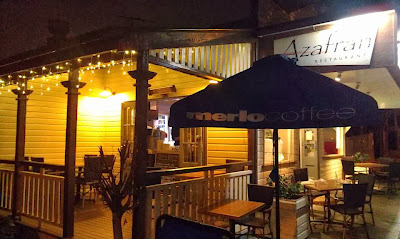 Living and working around the CBD area with an abundance of restaurant options can morph you into a creature of comfort, rarely venturing far from City-ville because a journey without chariot seems analogous to Frodo’s journey through Middle Earth. However, some journeys are worth the effort if you know the final destination will be rewarding...your eating adventure at Azafrán will have you coming back for superb breakfasts, 3-course week day lunch deals and dinners because Azafrán is the precious (insert Sméagol voice).

Elated energy flowed through the Friday night air as a food lovers’ meat-up was in order; new faces to meet, regular friends to greet at a new venue which proved to be a real treat. Azafrán is an award-winning gem located in Annerley. Only a short trip from the city thanks to fellow blogger - Melissa Loh - the restaurant revealed to be the owners’ home once upon a time; full of character and artistic flare featuring an ever-changing menu of Modern Australian food. 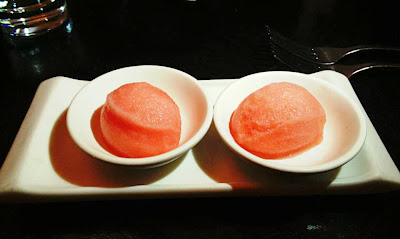 Seated in a private dining room – previously the owners’ bedroom - the remaining places at the round table were occupied by dolcie bunny, foodmeupscotty and feedmenowbrisbane armed with an appetite ready to begin our epic adventure through the tasting menu.

The five course tasting menu was a unanimous decision allowing the opportunity to experience a variety of options that were especially selected by the Chef and Menu Maestro, Marc Bocquee.

The journey began with a selection of sourdough breads with hazelnut dukkah and soft butter with sea salt. 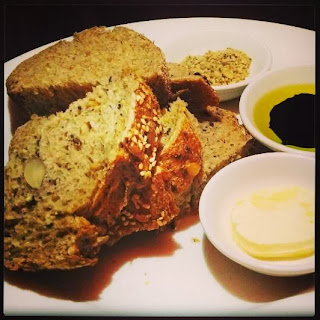 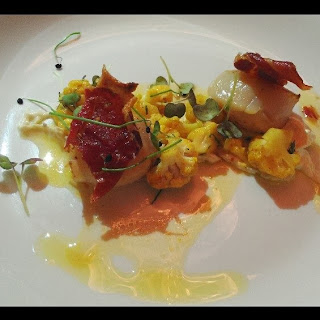 Entrée numero dos was  a pan roasted barramundi with poached asparagus flaunting a prawn ravioli hat and cardamom emulsion; it’s obvious why Azafrán was awarded an Australian Good Food Guide chef’s hat by their use of fresh and quality produce . Before moving onto the mains, a sphere of watermelon flavoured palate cleanser was presented, refreshing the tastebuds for more action. 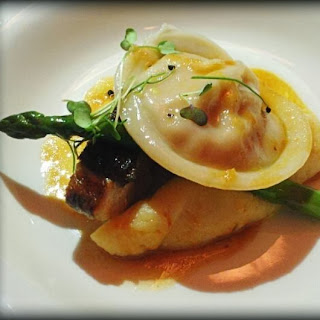 The first main to arrive - to outwardly busting excitement - was a slow cooked pork belly with pumpkin puree, braised cabbage and a crunchy-on-the-outside, awesome-on-the-inside beef croquette. This dish was so deeply enjoyed that I was literally dancing with delight in my seat, and Melissa Loh licked a love heart in the remaining jus on her plate - for footage view @brisbellyblog instagram. 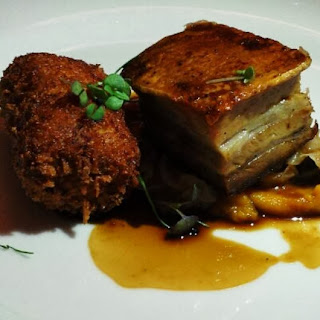 The savoury flavours had almost come to an end as the second main arrived revealing a confit of duck leg perched upon spring vegetables, gnocchi and pinot nois jus. Confit is a salt-curing preservation technique followed by cooking the meat in its own fat resulting in a beautiful, rich flavour. 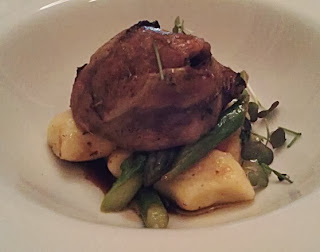 Pork and peanut butter are two of this belly blogger’s most pleasurable tastes. Tonight was a particularly lucky night where these two favourites brought heavenly delight. Perfect proportions of each dish allowed room for a delectable peanut butter dacquoise topped raspberries and creamy Belgium chocolate ice cream, which was consumed in complementary silence, reflecting on the voyage that had come to an end. 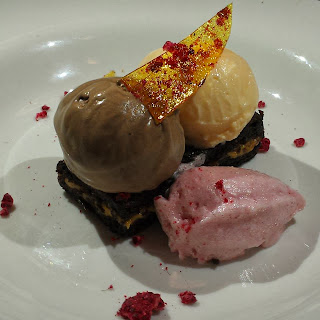 During the Middle Ages a Round Table tournament was a lively festive event and similarly  this eve was filled with plenty of cutlery jousting, phenomenal feasting and loads of laughs while reminiscing past food adventures and planning future meal missions– it’s a good thing our noisy fellowship of the food had a private room. After appetites of the hungry hobbits were appeased, we travelled sleepily back to our shire to drift into a blissful food coma. 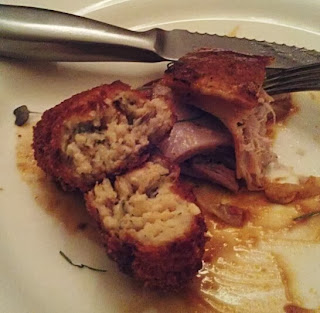